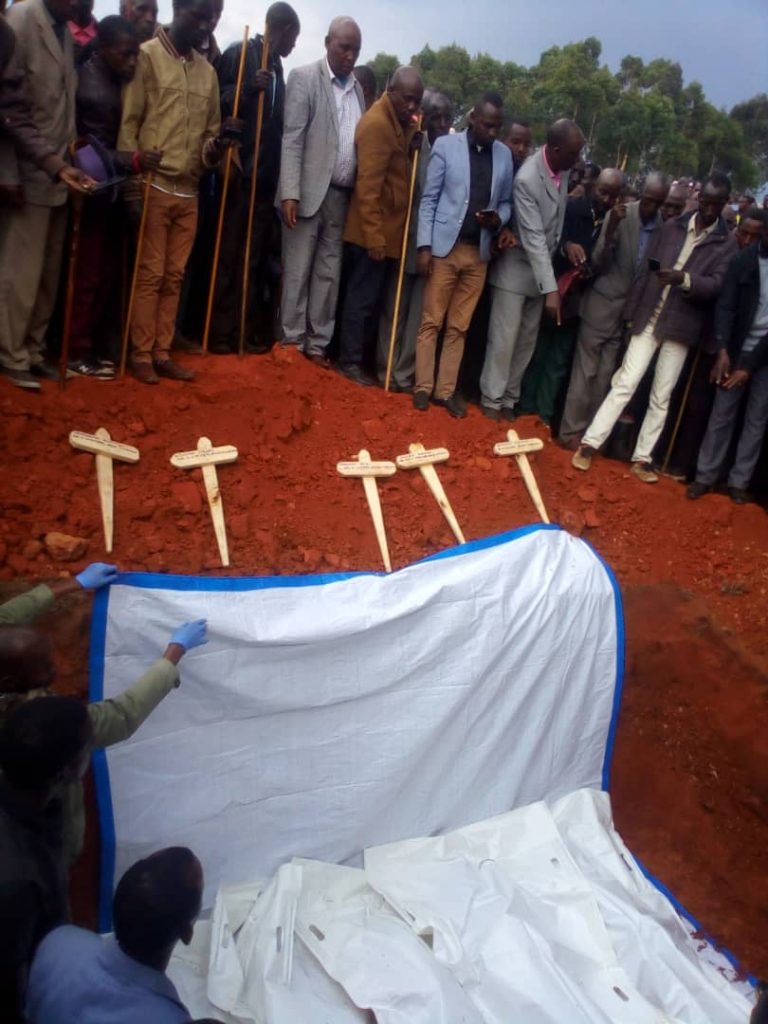 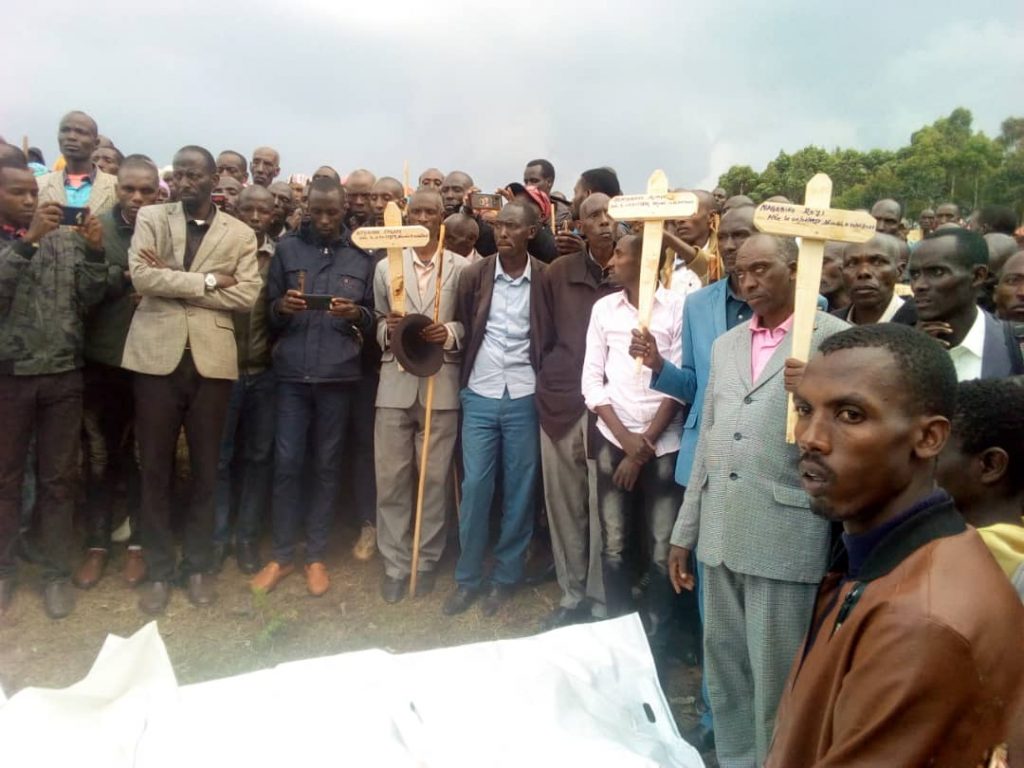 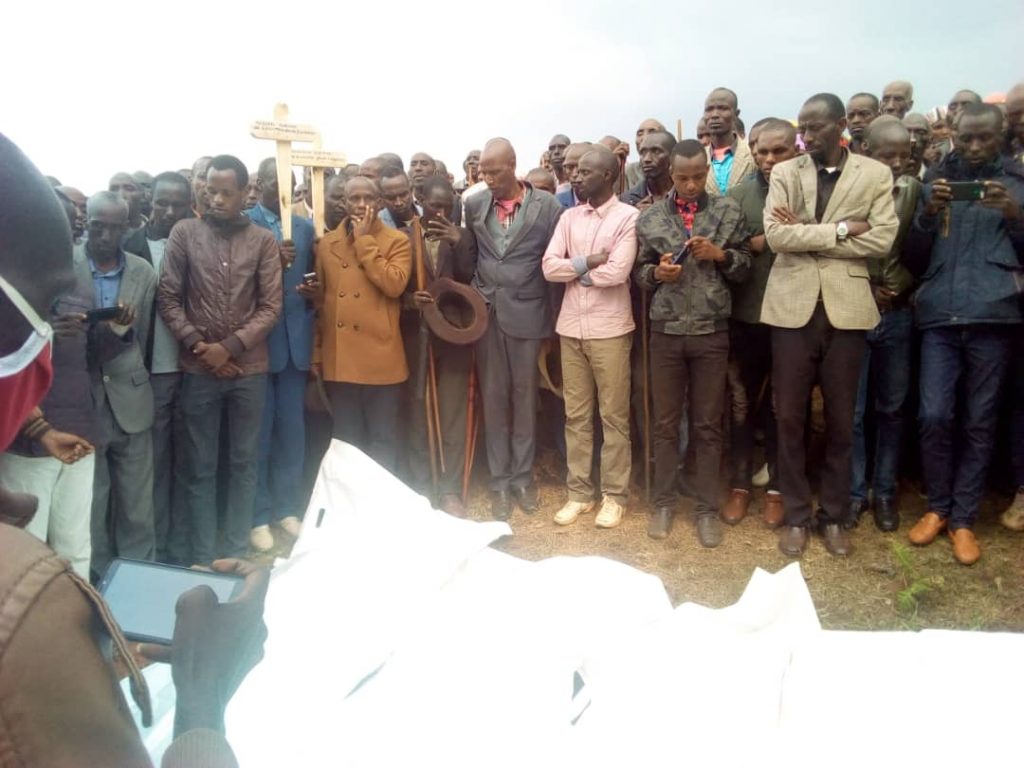 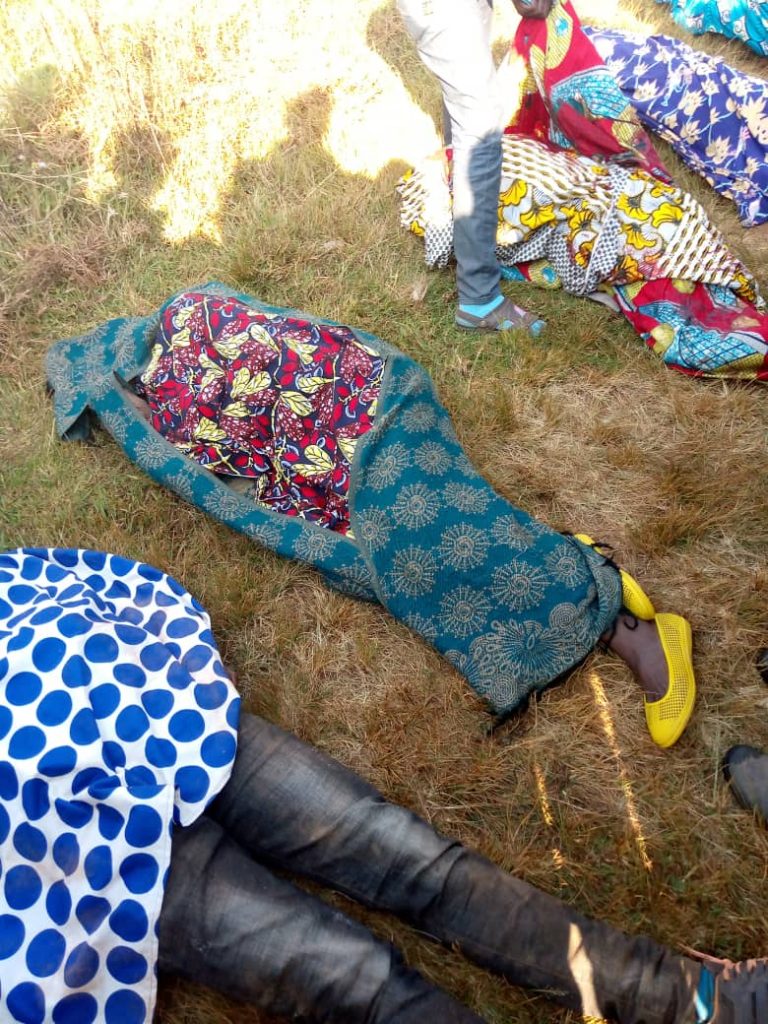 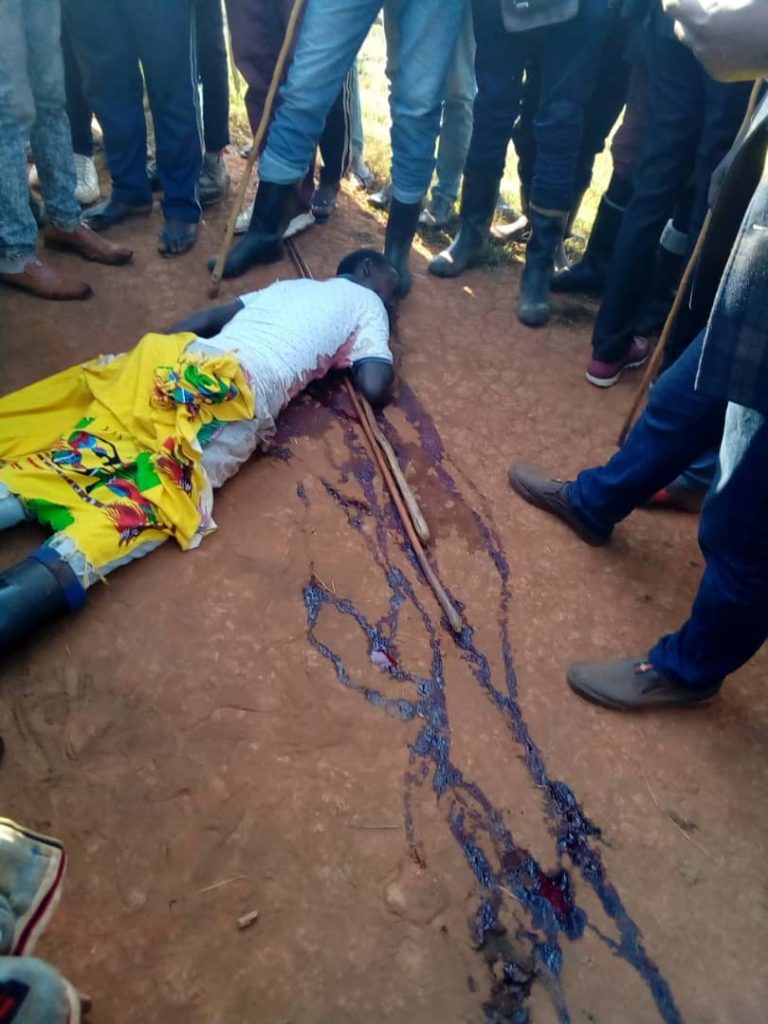 Concrete Evidence of the Role of the Congolese Government in the Ethnic Cleansing of the Banyamulenge in their Homeland.

Since April 2017, an ethnic cleansing war has been taking place in the highlands of the territories of Uvira, Fizi and Mwenga in the sector of Itombwe, the main objective of which is the total uprooting of the Banyamulenge in these territories.

What is horrible and hard to believe is that the Congolese Government, whose main mission is to maintain public order and security on behalf of all the populations of the country, has been passively witnessing, for more than four years, the complete destruction of villages, the systematic looting of cattle and the mass killings of the peaceful Banyamulenge peasants by Mai-Mai militias from the Fuliru, Bembe, Nyindu and Vira tribes, in coalition with the Burundian rebels of Red-Tabara, Forebu and FNL. These crimes are being perpetrated in localities which are under the protection of soldiers of the regular Congolese army, without the latter intervening to prevent the attackers from committing these crimes.

Currently, 97 % of Banyamulenge villages from Minembwe to Rurambo, via Itombwe and Bijombo have been completely destroyed and wiped off the map of the Democratic Republic of Congo and 95 % of their cattle raided, as well as several hundred people killed by the Mai-Mai militias and the Burundian rebels of RED-Tabara, FNL and Forebu, in complicity with the soldiers of the regular army.

These soldiers are working under the supervision of the Congolese government, deceiving both the internal and international community regarding the real objective of this war, which is ethnic cleansing. They have falsely portrayed the war as being a disagreement about the destruction of fields by cows belonging to cattle breeders.[1] In other words, for the Congolese government, the Banyamulenge being mainly herders, are being killed and driven out of the Democratic Republic of Congo because their cows have caused destruction of the fields of Bantu farmers.

Thus, there is material proof of the role of the Congolese Government in this plan of ethnic cleansing of the Banyamulenge in their environment of origin, namely:

Indeed, since 2017, the following Banyamulenge villages and social infrastructures that we present as a non-exhaustive list have been completely razed from the map of the Democratic Republic of Congo in the face of the total silence of the Congolese government in the territories of Uvira, Fizi and Mwenga in the sector of Itombwe.

I.1. Material evidences of the ethnic cleansing of the Banyamulenge in the territories of Uvira, Fizi and Mwenga (sector of Itombwe).

I.1.1. At the level of the Bijombo Groupement in the territory of Uvira.

From 2017 to May 29, 2021, more than thirty-eight Banyamulenge villages (enumerated below) in the Bavira chiefdom, in the Bijombo ‘groupement’, have been totally erased from the map of the Democratic Republic of Congo, without the government taking any account of them. In these various areas there were soldiers of the regular army who did nothing to protect the victims against the attacks of the Mai-Mai militiamen and the Burundian rebels. Similarly, they did nothing to prevent the destruction of their villages, or the looting of their livestock.

During the last attacks on the villages of Murambya on 29 May 2021 seven people were killed, eleven others injured, and twenty-seven women[4]and their young children abducted and detained for some days as sex slaves by the assailants, who had killed some of the husbands of these women. The report of the local authorities of these villages[5]  shows  that the Mai-Mai militiamen and the Burundian rebels crossed without hindrance the localities where the positions of the regular army soldiers (the AFDRC) of Gongwa, Nyarwango, Mbundamo and Murambya are located, before reaching the villages of the victims. After the attacks, they crossed the same localities of the AFDRC positions with these hostages and several hundred looted cows, without the soldiers of the regular army trying to free the hostages  or save these cows from the hands of the  Mai-Mai militiamen and the Burundian rebels.

These women and their minor children were released after paying the assailants a sum of money, the amount of which has not been disclosed to us. And one of these hostages reported that Gisiga, the commander of the Burundian armed group of Red-Tabara,  had informed her that half of the looted cows are distributed to the soldiers of the regular army and the remaining 50% were shared between the Mai-Mai militiamen and the Burundian rebels.[6]

I.1.2. At the level of the sector of Lulenge in the territory of Fizi.

During the various attacks that destroyed all these villages several  Banyamulenge civilians were killed and several thousand of their cows looted by the Mai-Mai, Bembe, Fuliru and Nyindu militiamen, under the supervision of the soldiers of the regular army, who supplied them with ammunitions and weapons.[8]

I.1.3. The sector of Tanganika in the territory of Fizi.

During these attacks several thousand cows were looted and several people were killed without the regular army soldiers based in this area intervening to protect the victims and their property.

I.1.4. The Banyanyamulenge villages destroyed in the sector of Itombwe in the territory of Mwenga.

[1] See the statement by the President of the Democratic Republic of Congo, Felix Tshisekedi Tshilombo at the Paris Summit of May 17, 2021 on African Economies.

[2] One of the hostages of the Murambya attacks of May 29, 2021 revealed that a Burundian rebel commander told her that 50% of the cows looted from the Banyamulenge go the soldiers of the regular army, and another 50 % are shared between the Mai-Mai and the Burundian rebels.

[4] During the attacks of Murambya of 29 May 2021 the following people were killed: the chief of the locality Seruhigiza, Pastor, Rugeza and four others whose names have not otherwise been identified.

[6] The testimony of one of the women who had been kidnapped during the Murambya on an existing alliance between militiamen Mai-Mai, Burundian rebels and regular army soldiers over sharing of war booty looted from the Banyamulenge.

[7] Paragraph 114 of Annex 107 UN Experts’ Report S/2021/560 reveals that Dieudonné Betechi Muhima, commander of the 12th Rapid Reaction Brigade was the determining element of the support provided by the Armed Forces of the Democratic Republic of Congo to Mai-Mai groups in the context of the attacks on the Banyamulenge villages and the looting of their cattle.

[9] The following military positions were found in all parts of the Itombwe region, as can be seen from the figure in the annex, during the destruction of all the Banyamulenge villages in area, namely: Kipupu, Nazareti, Kibundi, Mikenke, Kwitala and Tabundi.

I.1.5. Rurambo, in the chiefdom of Bafuliru in the territory of Uvira

There have been no reports of intervention by regular army personnel in an attempt to protect the victims and their property during or after these attacks.

II.2. Some cases of the involvement of the regular army in the war of ethnic cleansing of the Banyamulenge.

It should be stressed that all attacks by the Mai-Mai and their Burundian allies against Banyamulenge civilians are always followed by a disinformation release from the spokesman of Operation Sukola II, South Kivu, Captain Kasereka Dieudonné, with the aim of diverting the attention of national and international opinion to the reality of this war.[8]

Otherwise, the war that the Mai-Mai militias and Burundian rebels are waging against the Banyamulenge is a war waged by the Congolese government against the Banyamulenge, the aim of which is to drive them out of Congolese soil. The Mai-Mai militias and the Burundian rebels being only agents in the service of the Congolese state, and this is the very reason for all the silence on the part of the Congolese government in the face of the tragedy of extermination of this victim community: May the Lord God come to their aid.

In view of all the above, the following recommendations are imperative:

With regard to the Congolese government

To the international community

Thus, you will have effectively protected the victims of this war and avenged the memory of those who have been unjustly killed.

[1] The photos of the two ladies Nyamutarutwa and Nyamwiza show that they were horribly killed after being wickedly raped and physically mutilated.

[2] According to local sources, Mr. Adoni was killed by regular army soldiers when he tried to warn the ladies Nyamwiwa, Nyamutarutwa and Nyansansirwa at their fields, that the Mai-Mai had just arrived.

[6] The Twitter of the Kivu security barometer on the complicity of regular army soldiers in attacks on villages in Kwahwela of 08 and 09 2020.

[7] Threats that the soldiers of the 12th Rapid Reaction Brigade made to the civilian population of Minembwe during the attacks of July 1, 2021.

[8] When the Mikenke IDP camp was attacked by the Mai-Mai Ebuila group, and that seven people were seriously injured, including the old lady Uzie who died from injuries at the general hospital in Bukavu, Kasereka jusfied the consequences of this attack on the victims as having been caused by stray bullets as if the attack was directed elsewhere.